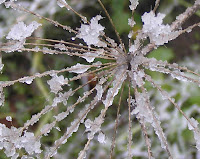 Gearing up for five weeks of extended summer travel and catching up with family and friends, I've decided to simply continue the example of this last week, and put Orexis Dianoētikē "on ice" for that month and some change -- at least as far as publishing new blog entries is concerned.  I'll continue writing and reflecting, and resume publishing posts when I arrive back at my new home in New York at the end of July.

The last two weeks have been very intense, productive, filled with exchanges of ideas, networking, settling happily into my new career, in which writing, speaking, and educational consulting take front and center, college teaching takes a back seat, and my lingering semi-administrative activities from FSU are one by one wrapped up with each report I finish and file.

Last week Monday, Richard Arum came to the Culinary Institute of America to discuss Academically Adrift with the faculty and to continue study of such institutions where trade and craft inform academics. I attended the event, and got a chance to pick his brain and sound him out on some issues of assessment and uses of the Collegiate Learning Assessment. Then, Wednesday and Thursday, it was off to St. Anselm's College for the Metaphysics Colloquium, focused this year on how the dimensions of sexuality, marriage, and political life inform human being and development.  Since Tuesday, I have been out here in Philadelphia attending the WACE conference, learning and listening to more about experiential education, and chatting with colleagues from different institutions, again about assessment of student learning.  Reflections and ruminations spurred specifically by these events will migrate their way into new Orexis Dianoētikē blog entries starting up again in the last week of July.

I've got a number of other sorts of pieces planned, some of them sketched, and in a few cases partly written.  I'll be resuming the thread of discussions of philosophical and theological theories about the passion, vice, and ethics of anger -- I still owe a second installation of Epictetus' views -- writing a good deal about Aristotle, Augustine, Thomas Aquinas, and moderns such as Descartes, Hobbes, and Hume. I'll also continue the new entries in the Sunday series on the levels of humility, moving backwards in time from Anselm to his earlier monastic sources.  The talk I gave in Fayetteville just before I left -- how the eight deadly sins became the seven with which we are familiar today -- is practically begging to be tailored into new blog entries.

A number of my previous articles have brought the philosophical disciplines -- particularly moral theory -- back into critical dialogue with contemporary social science, happiness literature, or psychologists brain studies  -- as reported for laypeople in popular venues, and I plan to continue these engagements.  I'll also continue commentary on trends and developments in world events, politics, culture, and in particular education.  I'll be writing quite a bit about cultures of assessment, the moral obligation for educational institutions to engage in responsible assessment of student learning, the CLA, and about infusion of Critical Thinking or Ethics into curricula, institutions, and workplaces -- again, I've left two obligations unfinished -- to follow up my piece about the Ethics in Business Education Project -- and, to provide an explicitly Aristotelian justification for why one could legitimately take pleasure in student failure (the companion to my to-date most-read piece)

I may dabble a bit more in philosophical readings of films -- my piece on Descartes, Lacan, and Black Swan appears to have gathered an appreciative readership -- including those I happen to watch over this break of sorts.  And, of course, I'll be posting some discussions related to the topics of my recent book, Reason Fulfilled By Revelation:  The 1930s Christian Philosophy Debates in France.  Short bits from the other books I'm working on -- you can read more about them in my Research Projects page -- will doubtless pop up here as entries as well.  Perhaps I'll also write a few pieces revisiting portions of my sizable but highly eclectic body of published work -- like this entry from last year.

All these plans and projections aside, I wish all of you readers, whether faithful, occasional, or even just glancing, a good, productive, enjoyable summer!  Until then, if you're seriously wanting some bits to satisfy a Sadler word fix, let me suggest my three favorite Orexis Dianoētikē pieces, two of the published articles of which I'm most proud, and what I consider my best three talks on my Youtube channel.