The Fans Have Spoken - Ballard, King, and Pratchett Join The List! 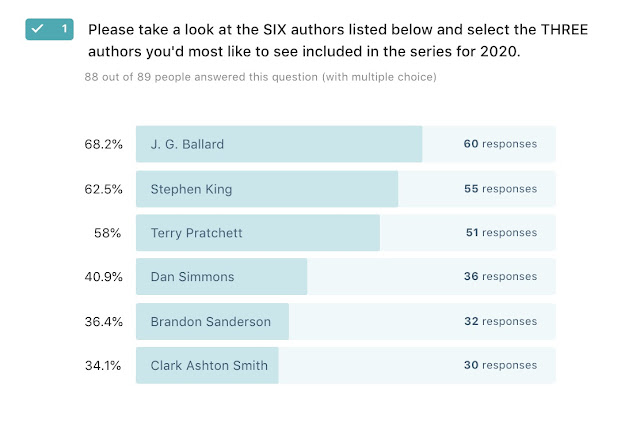 We ran a poll last week to determine which three authors would get placed in the final three slots for my monthly talk series, Worlds of Speculative Fiction, which is about to enter its 5th year.  A bit earlier, I had solicited suggestions from my viewers, subscribers, and followers, and out of the 30 or so writers suggested, I took the top 6 recommendations.

You can see the results above.  Ballard, King, and Pratchett easily outpaced the other three authors.  So I'll be adding them to the October, November, and December dates for the sessions.  They're all relatively new to me.  I did read a good bit of Stephen King back in my teens and early 20s, but not the Dark Tower series, which is what the recommendations centered around.  I'd read a bit of Ballard - his novel, Crash - back in my late 20s.  I remember being unimpressed by it at the time, but I'm certainly willing to give him another set of reads.  Pratchett, I've never read.  So, I've got my work cut out for me, but I've got months to get on it.

I can now definitively announce the line-up for Worlds of Speculative Fiction 2020:

We meet monthly, second Thursday of each month, 7:00 PM at the Brookfield Public Library, here in the Greater Milwaukee area.  You can find dates on my Facebook author page events, or on the ReasonIO calendar
Posted by Gregory B. Sadler
Email ThisBlogThis!Share to TwitterShare to FacebookShare to Pinterest
Labels: appearances talks or workshops, speculative fiction